Last price update was: February 3, 2023 8:05 am
× Product prices and availability are accurate as of the date/time indicated and are subject to change. Any price and availability information displayed on Amazon at the time of purchase will apply to the purchase of this product. 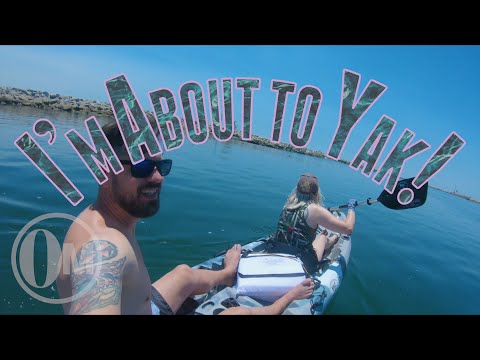 Add your review
Product is rated as #121 in category Fishing Kayaks
7.3

Amazon.com
Buy BKC TK219
As an affiliate of Amazon and other retailers, we may earn a small commission when you buy via our links. Thank you!

Brooklyn Kayak Company’s TK219 is a no-frills sit-on-top tandem fishing kayak that is guaranteed to facilitate a fun day out for the whole family or for you and a buddy. Priced affordably at about $1,000, this stable kayak is perfect for touring lakes, fishing, or simply just going for a casual paddle. Whether you are an experienced paddler or just starting out, the Brooklyn Kayak Company has got you covered with their reliable TK219.

7.3Expert Score
Brooklyn Kayak Company’s TK219 is a no-frills sit-on-top tandem fishing kayak that is guaranteed to facilitate a fun day out for the whole family or for you and a buddy. Priced affordably at about $1,000, this stable kayak is perfect for touring lakes, fishing, or simply just going for a casual paddle. Whether you are an experienced paddler or just starting out, the Brooklyn Kayak Company has got you covered with their reliable TK219.
Stability
7.5
Speed
7.5
Tracking
7.5
Comfort
7
Features
7
Portability
7.5
PROS
CONS

It has a dry weight of 68 lbs / 31 kg, which makes it almost identical to another BKC tandem fishing kayak, the TK181. However, the TK219 is way lighter than other bigger kayaks like the Jackson Big Tuna or the FeelFree Lure II, both of which weigh in at 92 lbs / 42 kg.

Despite being smaller and lighter, its maximum payload is way more than Jackson’s Big Tuna which can only allow for 500 lbs / 227 kgs.

Like all BKC kayaks, the TK219’s hull is a single-piece, rotomolded High-Density Polyethylene (HDPE). It is built for maximum durability and has been known to last, but it is still recommended that you coat the hull with UV protectant at the start and end of each season.

On the bow is the front t-handle for easy carrying and launching. Just behind that is one of two articulating rod holders that swivels 360 degrees. 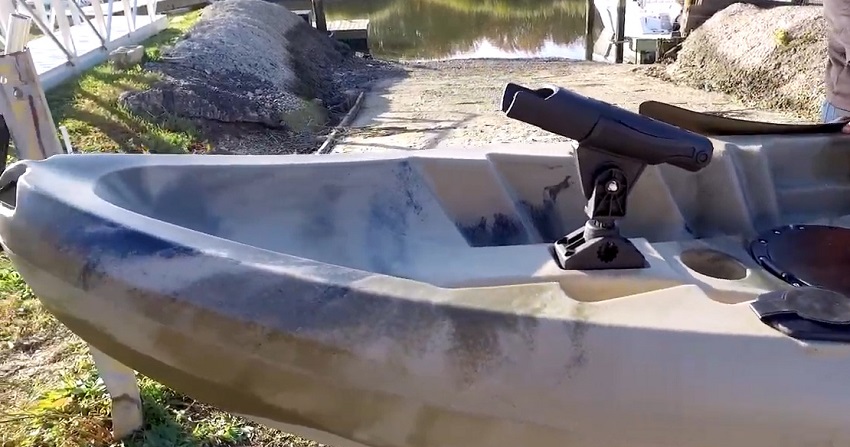 On either side of the rod holder are molded footrests that can accommodate paddlers of most sizes. There are a total of eight scupper holes with attached plugs in this kayak for easy drainage.

Just behind the rod holder is a cup holder, and two out of four flush-mounted rod holders on the gunnels.

In front of each seat is a round, watertight hatch with an included dry bag to stash your wallet, keys, and phones. It is a through-hull hatch, meaning removing the bag allows you to access additional storage in the kayak. 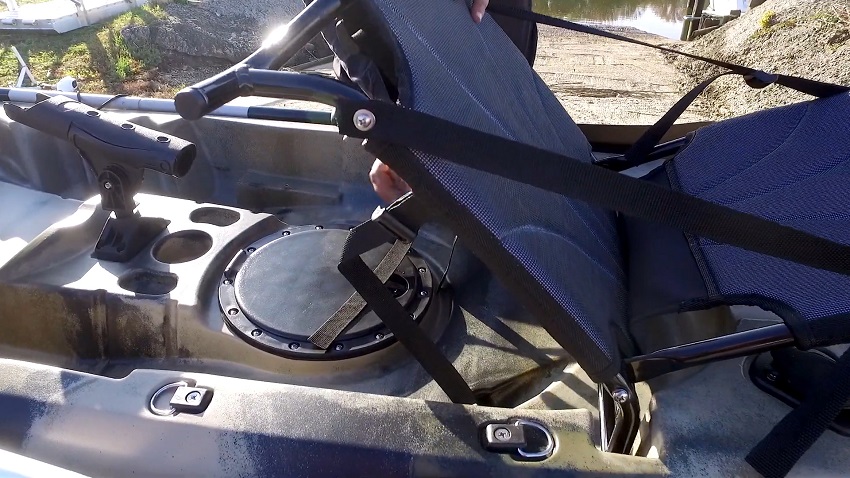 The TK219 comes with two included BKC’s KS222 padded seats that attach to the kayak with a four-point harness system. There is also a small storage back behind each seat. 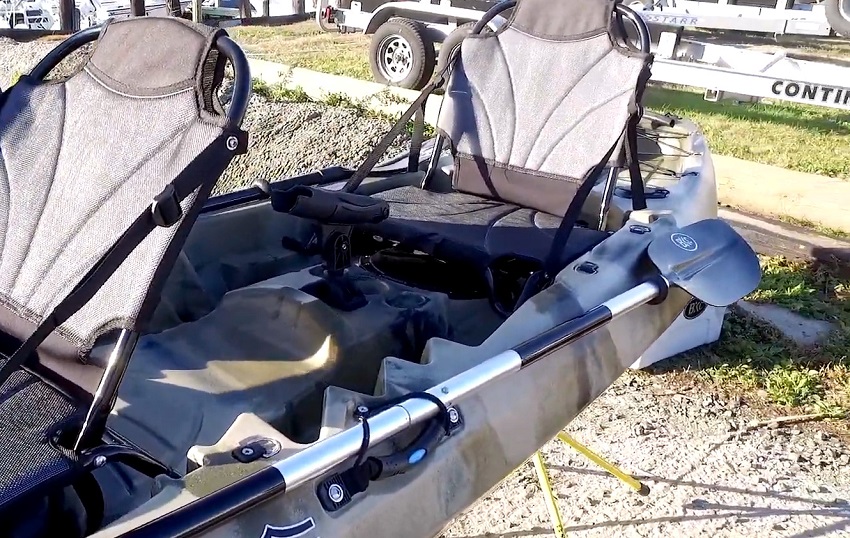 The seats are the standard padded seats by BKC, but if you want an upgrade, you can select the optional upright aluminum frame seats that perform better on long days.

There are plenty of D-rings throughout the kayak to secure the seats, paddle keepers, and anchors.

In the middle of the kayak are two side handles so you can carry your craft side to side instead of the usual front and back. Built into the side handles are two paddle park systems with bungees to secure your paddles when not in use. 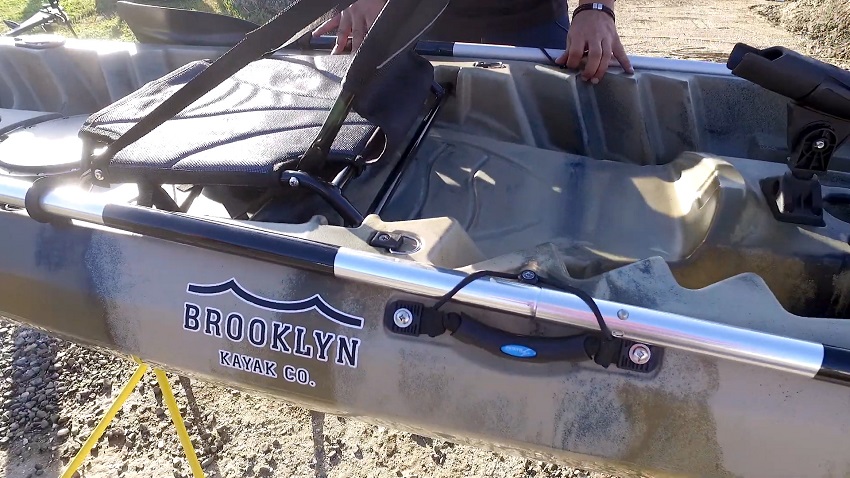 The TK219 can accommodate one, two or three riders. If you are paddling solo, you’d sit on the back seat and load the gear onto the front to stabilize the kayak. If you have an extra rider like a dog or a small child, there is a small deck area just behind the front seat where they can go.

The area in front of the back seat is almost identical to the front seat. It has one articulating rod holder, a cup holder, two small trays to store sinkers or tackle, and the same circular waterproof through-hull hatch.

Right behind the back seat on either side are two more flush-mounted rod holders. Towards the stern, there is a roomy storage area that can be secured with a bungee tie-down system. The storage can easily fit a cooler or a six-gallon bucket. 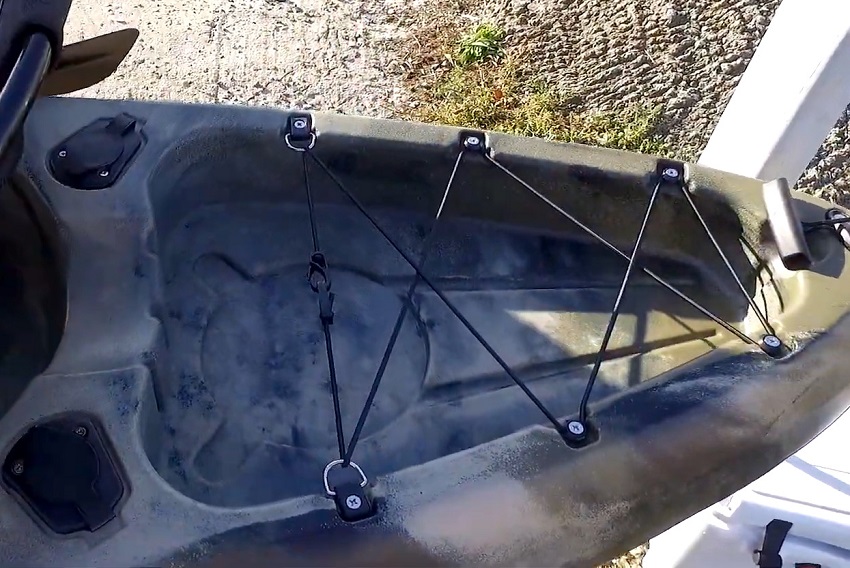 At the very back is the rear t-handle for transportation and a drain plug to get rid of stagnant water that might have found its way into the kayak.

It is nice that the TK219 can fit up to three people, which means a small child or the pooch doesn’t have to be left behind. The ample room behind the front seat and in front of the back footrests comfortably allows for an additional passenger. However, the third passenger wouldn’t have a seat.

This tandem fishing kayak tracks decently and is stable enough to feel secure in, but you probably wouldn’t want to be standing up in it.

In addition, while it is easily maneuvered around chop and rough waters, it might struggle with the tighter turns, especially when fully loaded with two or three people and all the gear.

It isn’t the speediest BKC kayak, but it will get you to the fish in relative comfort.

Overall, the BKC TK219 will make a budget-friendly, casual kayak for a family or couple that wants a fun boat to take out on the water all day and yet not break the bank. However, some features are lacking and this kayak may not suit the serious angler.