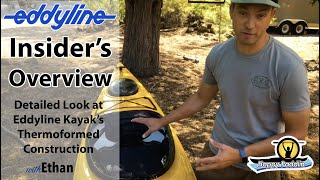 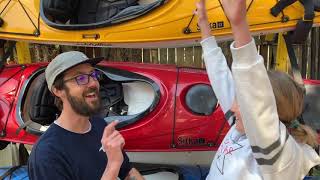 REI
See More
As an affiliate of Amazon and other retailers, we may earn a small commission when you buy via our links. Thank you!

One of the major factors which makes this kayak so accessible is the relatively lightweight construction. It weighs just 45 lbs (20 kg), lighter than many kayaks half its length. Most paddlers will be able to shoulder the Equinox comfortably and once there it balances well. You may need a hand lifting it onto your vehicle though.

Surprisingly for a kayak with relatively small dimensions and low profile, the Equinox has an enormous capacity of 360 lbs (163 kg). Remember that this includes all your equipment, too, but it still means there is a lot of room for kayakers of all sizes.

Being such a well-rounded crossover kayak, you won’t be surprised to see the Equinox has lots of features recognisable from traditional sea kayaks. One of the key features here is the ample storage. The two watertight hatches will fit loads of gear, making this boat great for long days out or even expeditions. The bungee in front of the seat gives you space for sponges, pumps and spare paddles that you may need to access while on the water.

Comfortable, retractable grab handles are connected to front and rear bungees, meaning that they sit flush with the kayak and don’t bang around during transportation.

Potentially the most important factor and one which makes this boat so popular is the extremely comfortable seat design that Eddyline have fitted. Combined with an adjustable backrest system, hip pads and padded thigh braces, you will not only be able to paddle this boat all day long, but you’ll have optimum control while you do so.

Finally, behind the kayaker there are re-entry perimeter lines, useful if you need to perform a self rescue in deeper water. Again, these are a sign of the sea kayak influence on this boat.

The Equinox has formed a large fanbase, due in part to the surprising amount of speed you can get out of such a short boat. The lack of rocker profile extends the waterline of the kayak and allows it to track very effectively through the water, although this does mean there is a certain amount of drag when trying to perform tight turns.

The seating position is extremely comfortable. Eddyline managed to fit such a large, accessible cockpit onto a kayak which doesn’t feel anywhere near as wide as it is. The only potential sticking point is the low profile of the kayak. For larger paddlers, it may limit legroom and the freedom of movement, which is not so comfortable for a long day out.

All round, it’s a great crossover kayak which carries speed well and can take your kayaking abilities to the next level. The rudderless design means you may have to get used to leaned turns, but the Equinox has enough primary and secondary stability to be the perfect boat for this progression.

A quick tour through some of the finer points of Eddyline Kayaks and what to look for when checking out thermoform kayak construction.

Eddyline Kayaks has come a long way since building whitewater kayaks in a small garage in Boulder Colorado in the '70s.

Be the first to review “Eddyline Equinox” Cancel reply