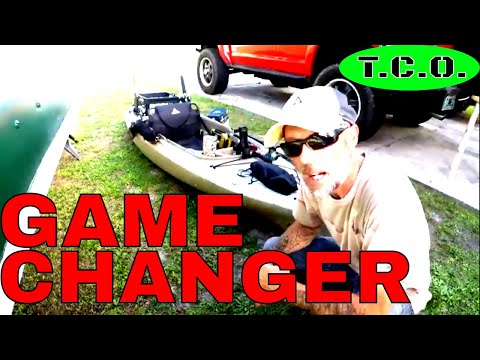 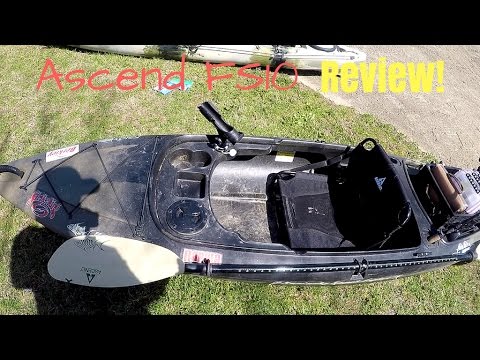 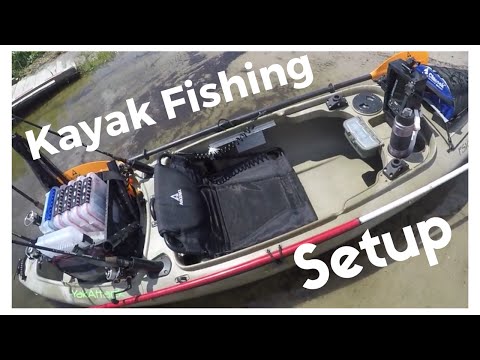 Add your review
Product is rated as #33 in category Fishing Kayaks
8.3

Bass Pro Shops
Buy Ascend FS10
As an affiliate of Amazon and other retailers, we may earn a small commission when you buy via our links. Thank you!

The Ascend FS10 sit-in kayak is a performance fishing kayak designed for serious anglers but will suit beginners as well. The extra-large cockpit allows easy entry and exit and plenty of room to cast or retrieve. In addition, the V-shape hull with a pronounced keel, aggressive strakes, and performance rocker assure easy maneuvering, excellent tracking, and superior stability. If you want a sit-in angler kayak with loads of room for gear and you fish mainly in calmer bodies of water like lakes, the Ascend FS10 is an excellent choice.

8.3Expert Score
The Ascend FS10 sit-in kayak is a performance fishing kayak designed for serious anglers but will suit beginners as well. The extra-large cockpit allows easy entry and exit and plenty of room to cast or retrieve. In addition, the V-shape hull with a pronounced keel, aggressive strakes, and performance rocker assure easy maneuvering, excellent tracking, and superior stability. If you want a sit-in angler kayak with loads of room for gear and you fish mainly in calmer bodies of water like lakes, the Ascend FS10 is an excellent choice.
Stability
9
Speed
7
Tracking
8
Comfort
9
Features
8
Portability
9
PROS
CONS

The compact Ascend FS10 angler kayak measures 10 feet (3 meters) in length and is 30 inches (86 cm) wide. It is relatively light for a fishing kayak and weighs 57 lbs (25 lbs), making it easy to handle for just one person.

Overall, the dimensions of the Ascend FS10 make it easy for anyone to load it on top of the car, manage it on land, or when launching it. 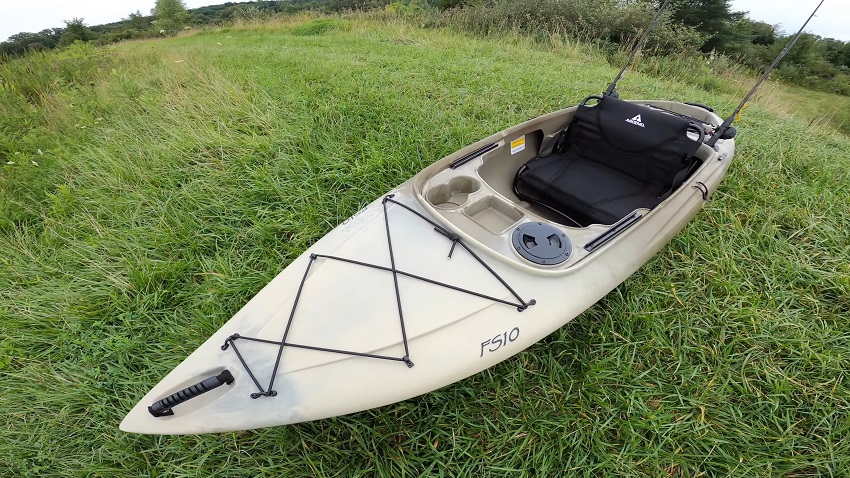 Despite its compact size, the Ascend FS10 can handle up to 325 lbs / 147 kg, which leaves anyone but the largest anglers plenty of allowance for gear and tackle. This kayak is an excellent choice for anglers that want something easy to handle yet offer plenty of room to stash gear.

Right at the front and back are two rubber-lined handles so you can easily handle your kayak on land. In addition, the easy-to-reach, bungee-corded deck lining lets you stash more gear and is a great place to tuck your rod under when not in use. 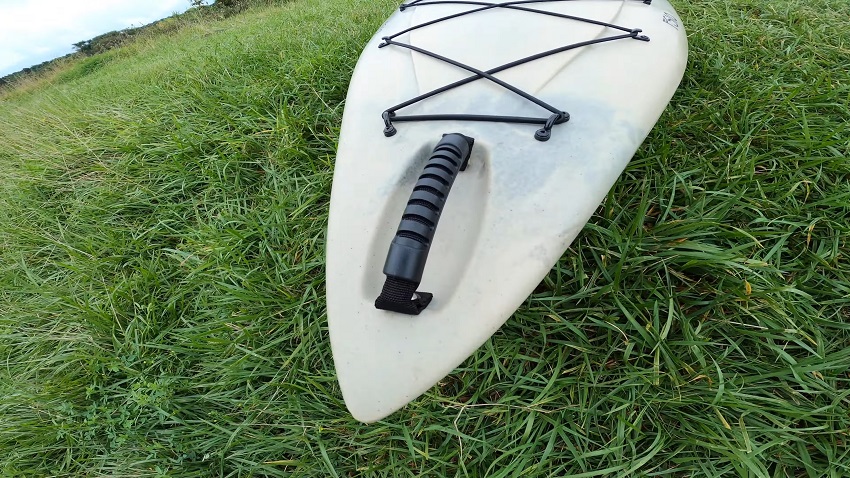 Right at the front of the cockpit is a tray with small storage cups where you can store your bait and tackle, a deep molded, dual-sized cup holder, and even a dry well where you can keep things that you need to keep dry.

Inside the huge cockpit with an opening of 35.1″L x 22.4″W, there are adjustable footpegs that can be tailored to your preference. However, the Ascend FS10 will only suit anglers from 5”2” to 6”2”. There are also two rails included on the sides where you can place a fish finder or any other electronics. 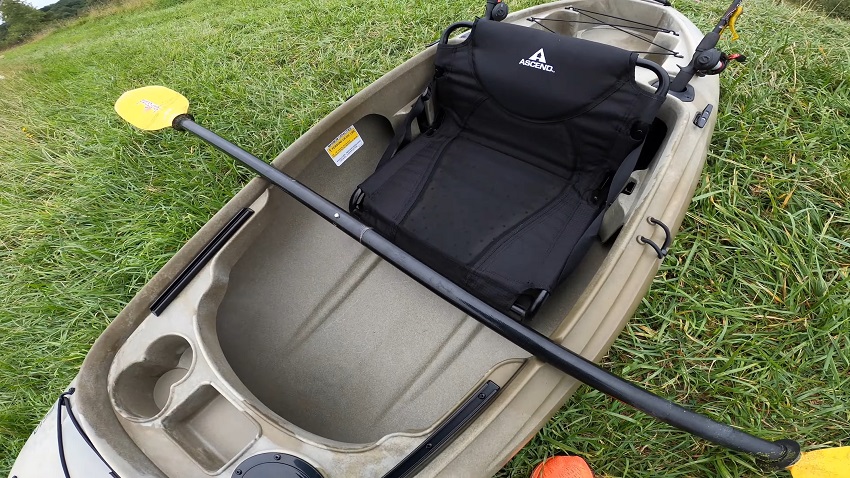 Along the outside of the cockpit also has a bungee cord-secured system that you can secure your paddle to when not in use. There’s also a groove along the coaming which prevents your paddle from rolling forward when you take a short break.

The seat that comes included is an ergonomic, comfortable seat that can be removed and used on land, so you can take it with you when you beach up. 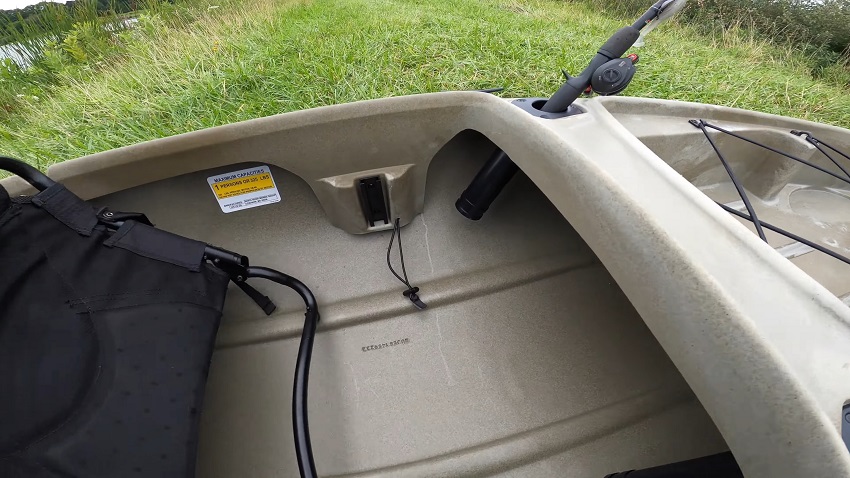 Just behind the cockpit are two cleats that make for handy anchoring spots, as well as two fishing rod holders.

The storage area on the stern is massive, and you can store a five-gallon bucket as well as a standard-sized milk crate or a cooler. There is a removable bungee cord that you can use when securing something like a dry bag. 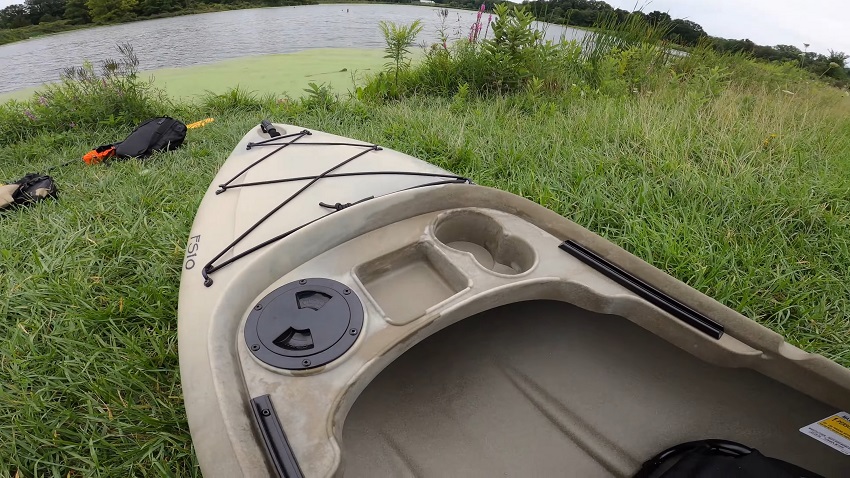 There is also some room behind the seat to store a small bag or box that you will not need access to regularly. Just beside the back handle is the drain plug for your use if your kayak takes in water. 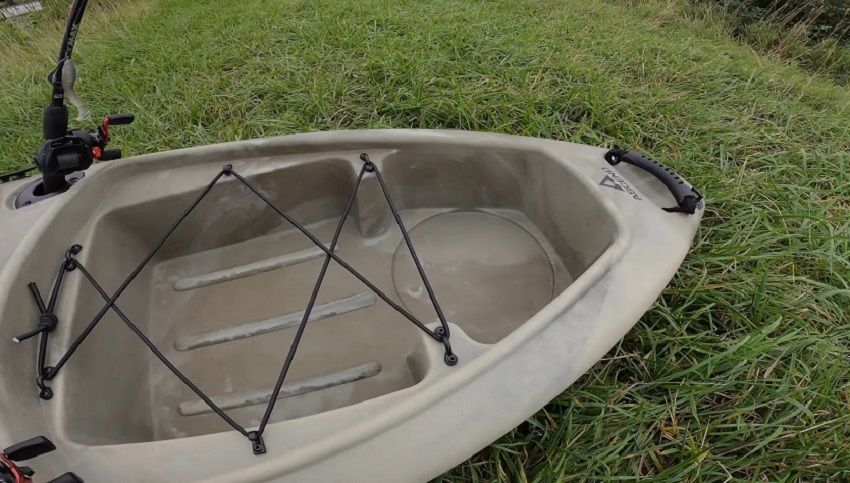 The Ascend FS10 is made of high-density linear polyethylene, which makes it ultra-strong, durable, and ready for all kinds of challenges. Undoubtedly, this performance kayak can take a beating without losing its performance. This kayak is said to last more than 15 years before it needs to be replaced.

Thanks to the V-shaped hull design, a performance rocker, and aggressive strakes, anglers regularly praise the Ascend FS10’s stability. However, in rougher conditions like rivers, this kayak is likely to be unable to stay dry although it remains stable.

The large cockpit makes it easy to get in and out of, while the stability means it is relatively easy to get back in should you capsize. The seat is super comfortable and you’ll be able to spend the day out without getting fatigued.

It rides a little low in the front so if you run into some larger waves or stronger winds, water might get over the front, into the cupholders, and into the cockpit. Be sure to stash your phone and other things that you need to keep safe in the dry well on the dash.

Like most fishing kayaks, the Ascend FS10 isn’t the fastest, but it does have excellent tracking abilities. All in all, the Ascend FS10 would be more suited for calmer bodies of water like lakes.