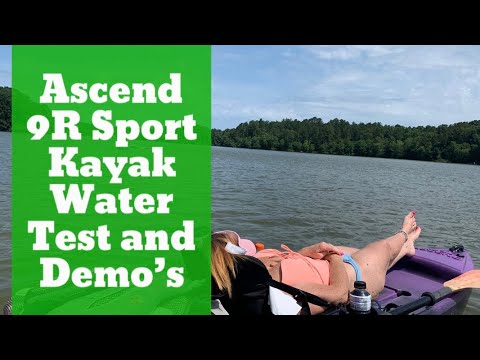 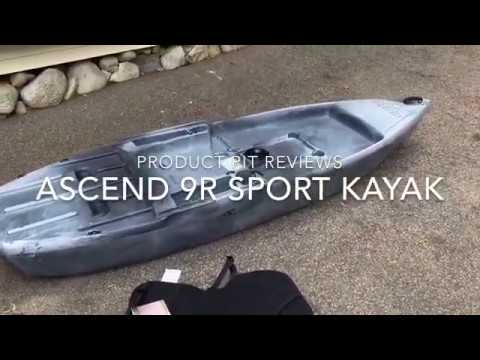 Add your review
Product is rated as #62 in category Day Touring
7.8

Cabelas
Buy Ascend 9R
As an affiliate of Amazon and other retailers, we may earn a small commission when you buy via our links. Thank you!

The Ascend 9R Sport sit-on-top kayak is a durable recreational play boat with Ascend’s signature tunnel hull design. This entry-level, open kayak suits smaller adults and youths that are under 5 feet 10 inches / 180 cm. It comes in a small, compact package that makes car topping easy, and this is Ascend’s only kayak that is retailing under $400 and according to them, it is one of the best-selling kayaks in the US.

7.8Expert Score
The Ascend 9R Sport sit-on-top kayak is a durable recreational play boat with Ascend’s signature tunnel hull design. This entry-level, open kayak suits smaller adults and youths that are under 5 feet 10 inches / 180 cm. It comes in a small, compact package that makes car topping easy, and this is Ascend’s only kayak that is retailing under $400 and according to them, it is one of the best-selling kayaks in the US.
Stability
7
Speed
7.5
Tracking
8
Comfort
8
Features
7
Portability
9
PROS
CONS 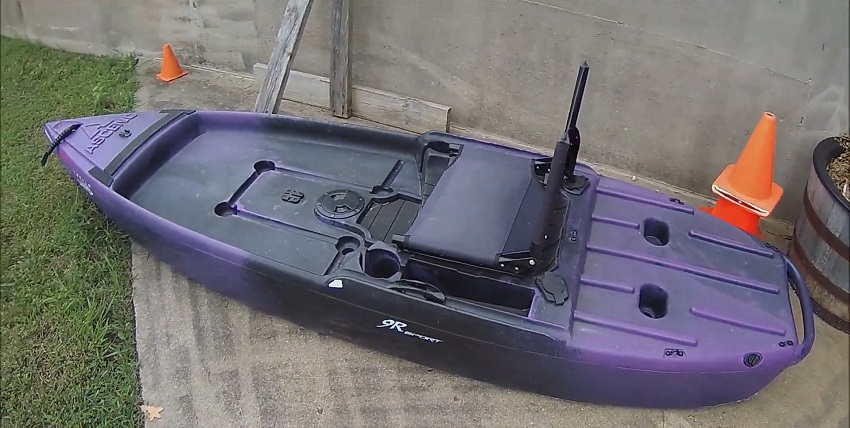 While it isn’t the lightest play boat on the market, the small, compact design still makes it easy for one person to stow, transport, and portage.

The hull is Ascend’s tunnel hull design with holes and a keel running from front to back that makes it easy for the kayak to track straight. At the bow, there’s a durable, rubber-lined handle to carry the kayak. 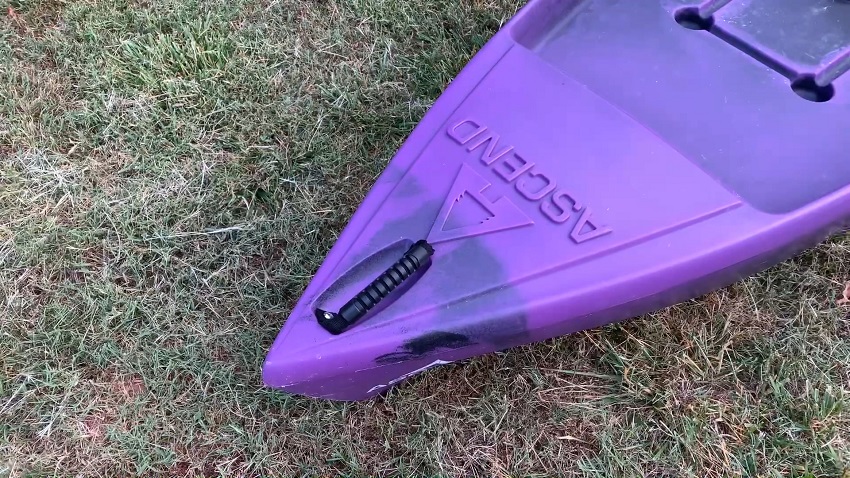 In front of the seat on a nice, wide deck, there are four scupper drains and a small, waterproof compartment where you can stash your phone, snacks, or anything small that you don’t want to get wet.

The wide deck allows you to bring plenty of stuff for the day, and maybe a medium-sized dog.

The adjustable seat is a thick, 1” foam-padded cushion that has friction rubber on the underside to help prevent you from sliding around on the kayak. The seat rides fairly high, so your center of gravity will be higher than most other sit-on-top kayaks where the seat is in some kind of depression. 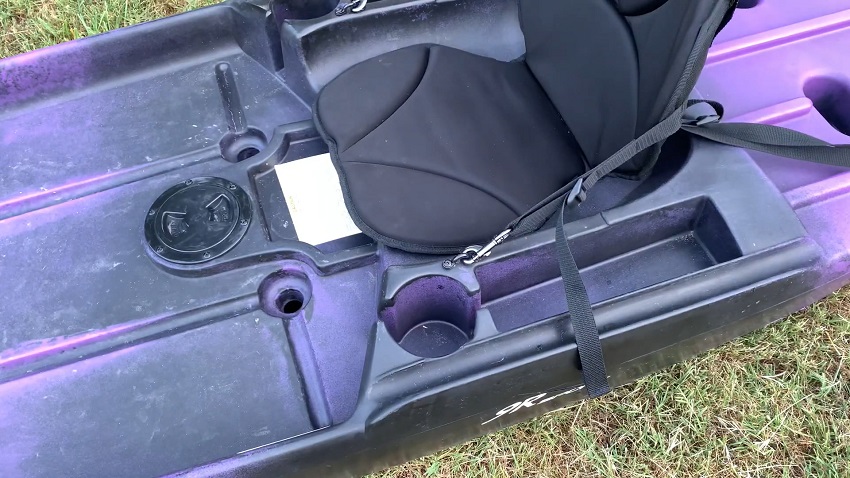 Close to the seat on both sides, there are molded storage compartments where you can put some small items, and two cup holders. There are molded grooves under the seat to help create friction and keep the seat in place and also two more scupper drains.

Towards the stern, the deck is wide and flat, and you’ve got two scupper drains and one drain plug. The drain plug is mainly to empty out any condensation, as water wouldn’t get in there on a sit-on-top. 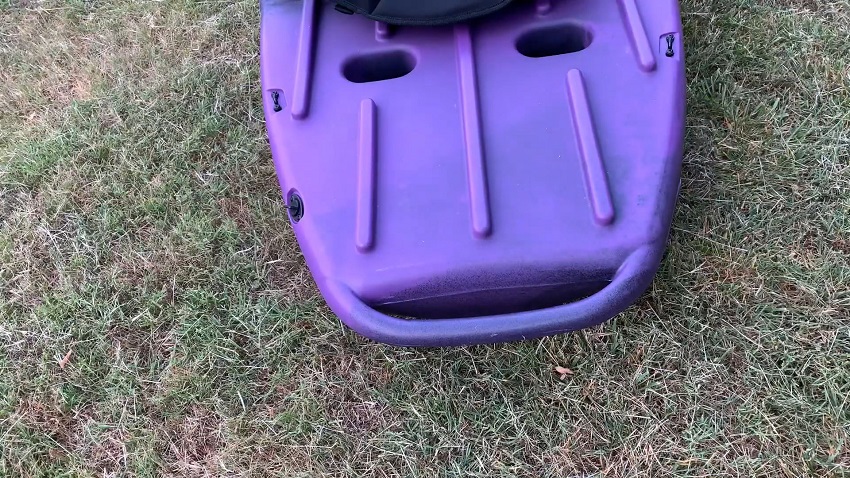 On both sides, you’ve got little hooks that you attach the seat to, but you can attach bungees to or do some modifications if you want to place rod holders. There’s also a big handle right at the back of the kayak so the kayak can be lifted by two people.

The Ascend 9R is an easy kayak to paddle. It paddles smoothly and tracks well, but is best suited for calmer bodies of water.

Because of the lack of foot pegs, the kayak is not as easy to control in rougher waters and some stability is sacrificed. Also, the seat is positioned higher than other sit-on-top kayaks, and the center of gravity is higher which might be a problem in big waves.

The unique hull design of this kayak makes it track well, and while it isn’t the fastest play boat on the market, the kayak has relatively good speed, especially for one that wide. 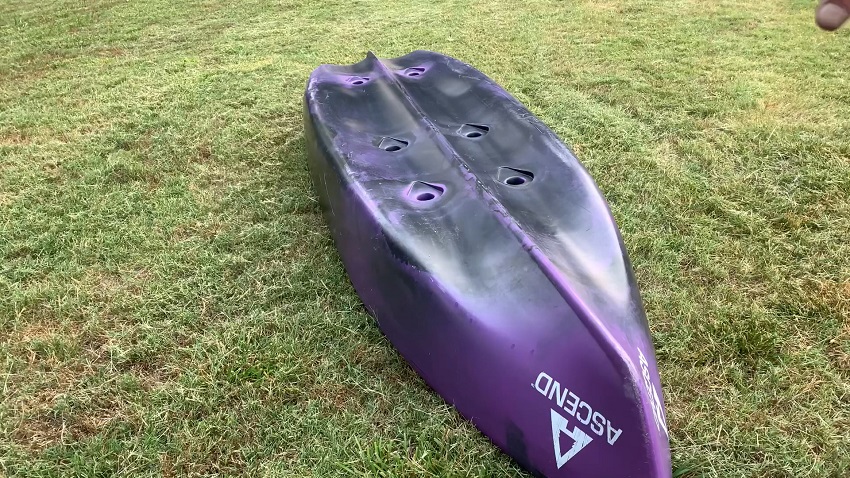 There have been some reports of the cup holder cracking, but that could be due to the kayak being left out in the sun for too long.

All in all, the Ascend 9R is a small, affordable kayak that will make a nice addition to any fleet of kayaks. Easily paddled and manipulated, this kayak will also suit beginner paddlers looking for their first boat to use out on lakes and calm waters.

However, if you paddle frequently in strong winds and rough seas, this may not be the right kayak for you.