Last price update was: January 19, 2023 5:36 am
× Product prices and availability are accurate as of the date/time indicated and are subject to change. Any price and availability information displayed on Amazon at the time of purchase will apply to the purchase of this product. 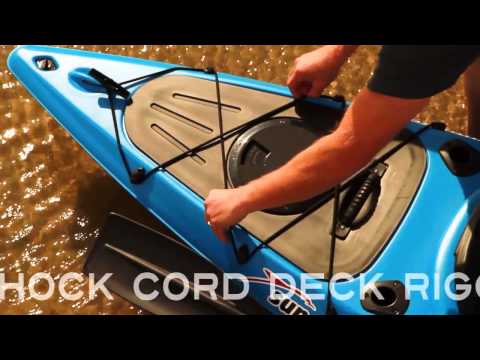 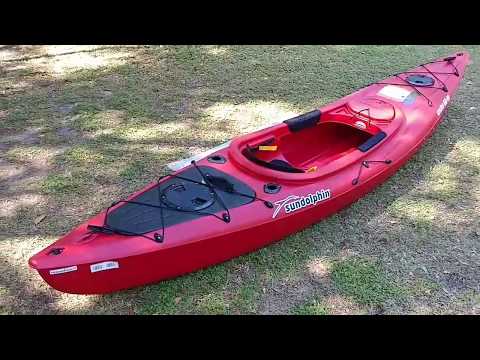 Add your review
Product is rated as #94 in category Day Touring
7.3
Best deal at:

Amazon.com
Buy Sun Dolphin Aruba 12 SS
As an affiliate of Amazon and other retailers, we may earn a small commission when you buy via our links. Thank you!

The Sun Dolphin Aruba 12 SS is an entry-level sit-in kayak that is more suited to calm waters like gentle rivers and smaller lakes. Retailing at about $400, it will be a good first kayak for someone looking to get into kayak fishing without dishing out a great deal of money. Reliable and sturdy, the Aruba 12 SS offers convenience, portability, and some comfort for shorter days. For the casual paddler or beginner angler, this kayak makes an excellent choice!

7.3Expert Score
The Sun Dolphin Aruba 12 SS is an entry-level sit-in kayak that is more suited to calm waters like gentle rivers and smaller lakes. Retailing at about $400, it will be a good first kayak for someone looking to get into kayak fishing without dishing out a great deal of money. Reliable and sturdy, the Aruba 12 SS offers convenience, portability, and some comfort for shorter days. For the casual paddler or beginner angler, this kayak makes an excellent choice!
Stability
8
Speed
7.5
Tracking
7
Comfort
7
Features
7
Portability
7.5
PROS
CONS

It weighs 47 lbs / 21 kg, making it easily managed by one person for transportation and launch. The weight is comparable to other recreational single kayaks like the Eddyline Caribbean 12FS which weighs 45 lbs / 20 kgs and is a tad lighter than the Pelican Covert 120 which weighs 55 lb / 24.9 kg. 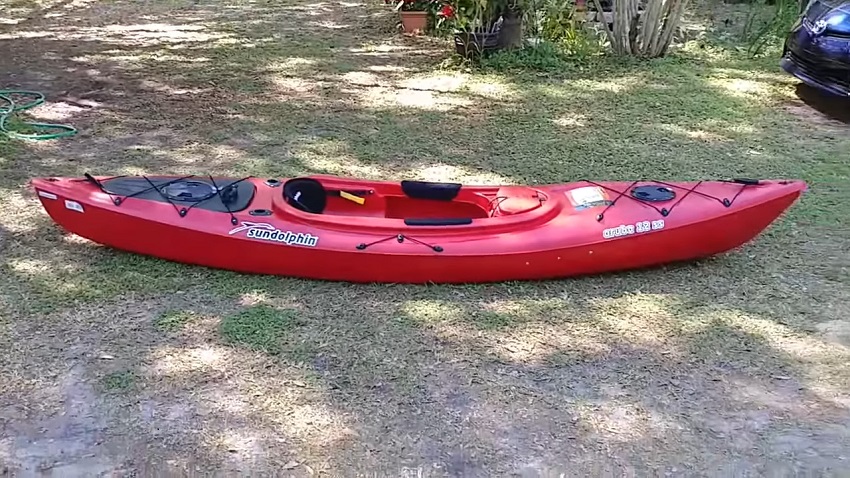 The Aruba 12 SS has a maximum payload of 395 lbs / 179 kgs, which leaves plenty of room for bigger paddlers and gear. However, you wouldn’t want to load it more than 300 lbs / 143 kgs or you might risk losing some performance.

Like many other kayaks, the Aruba 12 SS is made of high-density polyethylene (HDPE) which is known for its strength and durability.

At the tip of the bow is a drain plug that you can use to remove the excess water that managed to find its way into the kayak. Right by that is the first t-handle for easy carrying and transportation.

Further along, the kayak has a bow storage area that can be secured with a removable bungee tie-down system. There’s also a circular watertight hatch that leads to a dry area that is separated from the cockpit by a bulkhead. 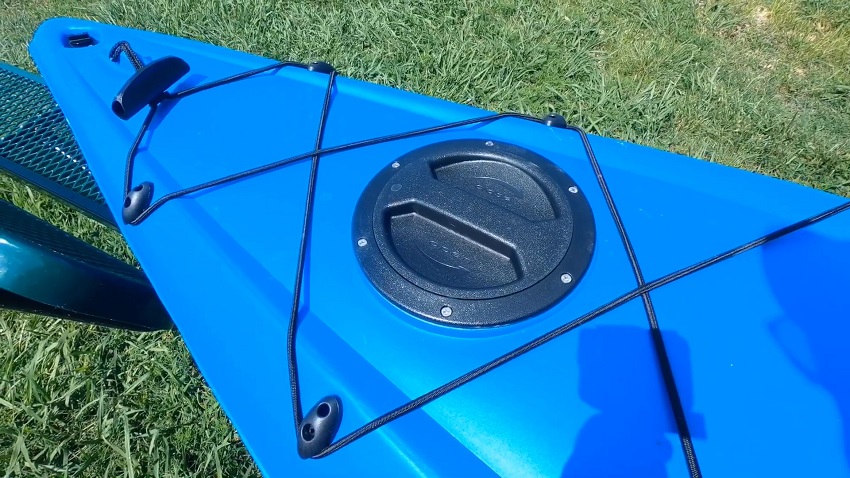 Note: Right out of the box, there are often plastic shavings left over in the storage area in the kayak from the manufacturing process. It isn’t a big deal, but you’ll need to tip the kayak and clean it all out before you use it!

At the front of the cockpit are adjustable foot braces to suit paddlers of all sizes. In addition, along the coaming are two protective pads for your thighs.

In front of the seat is a cup holder that is way too small for a can or water bottle. Pretty useless actually, yikes! 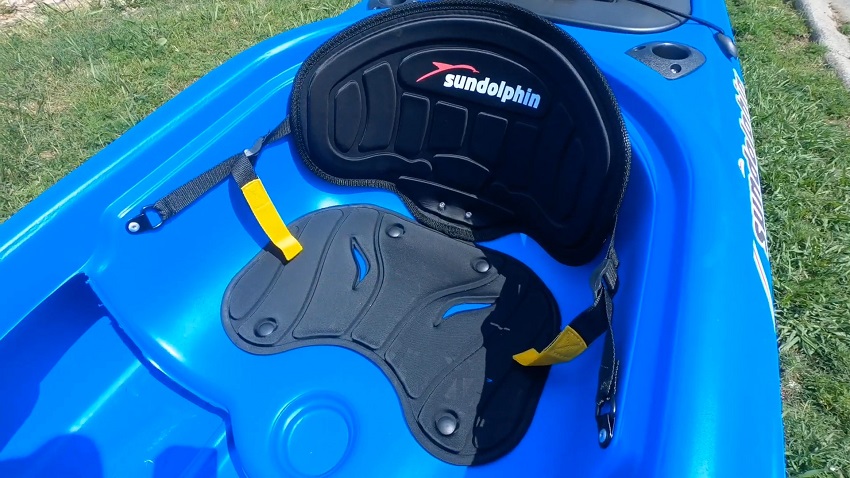 Further forward is a tray storage area secured with a lid, bungee cord, and J-hook. These can be used to store small stuff like your tackle, and some smaller phones might be able to fit.

The adjustable padded seat and backrest are of average comfort. However, the Aruba 12 SS’s seat is a significant improvement from the Aruba 10’s seat which only has a padded backrest and no padding at the bottom.

Just behind the seat are two flush-mounted rod holders. Note that the rod holders don’t have any covers, but it isn’t a through-hull, so the water will collect in the rod holders and not the kayak. You’ll still have to tip out the water at the end of the day though. 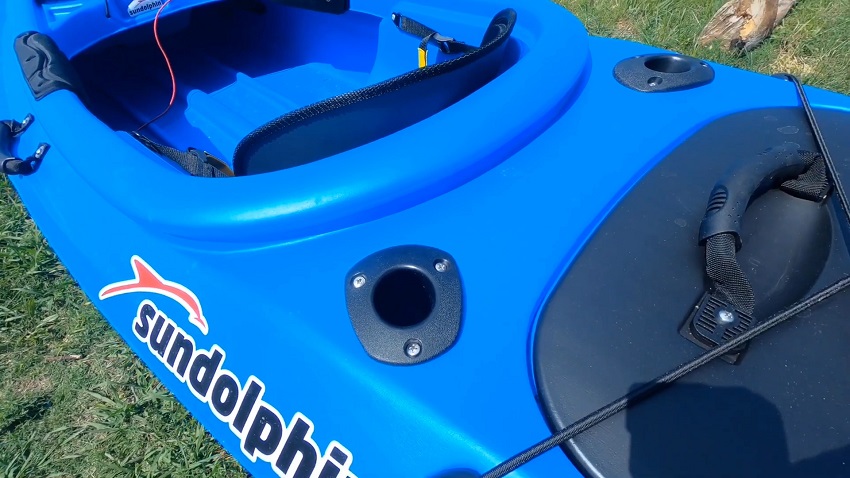 Behind the rod holders towards the stern is a watertight circular storage area. The whole storage container can be removed by pulling on the rubber-lined handle and it will simply pop out. The container floats and can be dragged behind the kayak if you need the extra room. 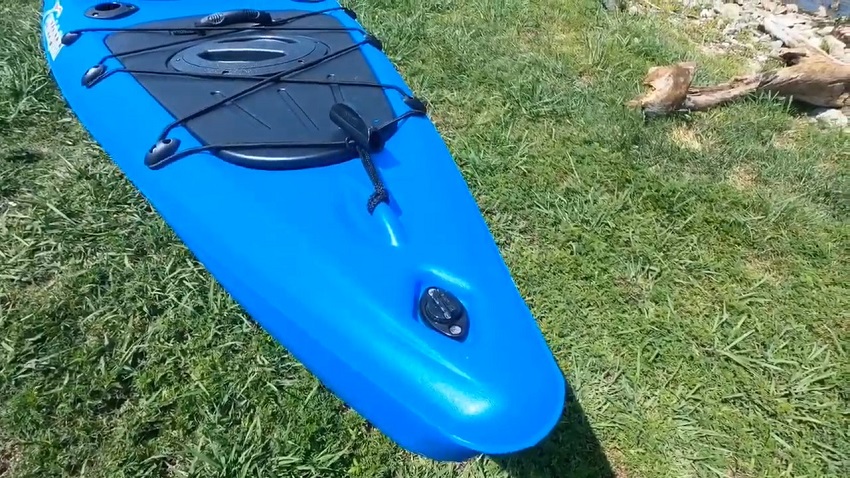 If you remove the storage, you can use the indentation in the kayak to stow larger items like tents or dry bags with the bungee tie-down system. 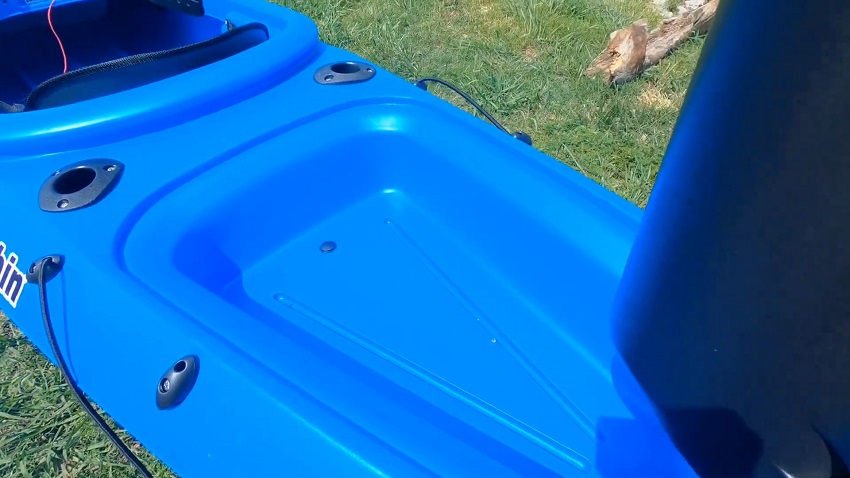 At the very back is the second t-handle for carrying the kayak. The Aruba 12 SS comes with a two-piece paddle that has two adjustable angles of feathering.

Sun Dolphin has another kayak called the Excursion 12 SS that is almost identical to the Aruba 12 SS and retails at slightly more. The only difference is that the Excursion has an additional articulating rod holder that can be mounted at the front of the cockpit.

The Aruba 12 is lightweight and easy to carry, making it suitable for solo paddlers. To carry it alone, you can hook it over your shoulder using the knee pads on the coaming for cushioning.

This kayak will suit a recreational paddler or beginner angler that wants to try their hand at kayak fishing without shelling out tons of money for a high-end fishing kayak.

It is stable and maneuverable, but only average at tracking and will nose-walk a fair bit. In addition, the seat isn’t the most comfortable, especially on long days.

The shape of the hull makes it more suitable for flatwater like what you’d find in a calm lake or gentle river. It would not do well in rough waters or choppy oceans. 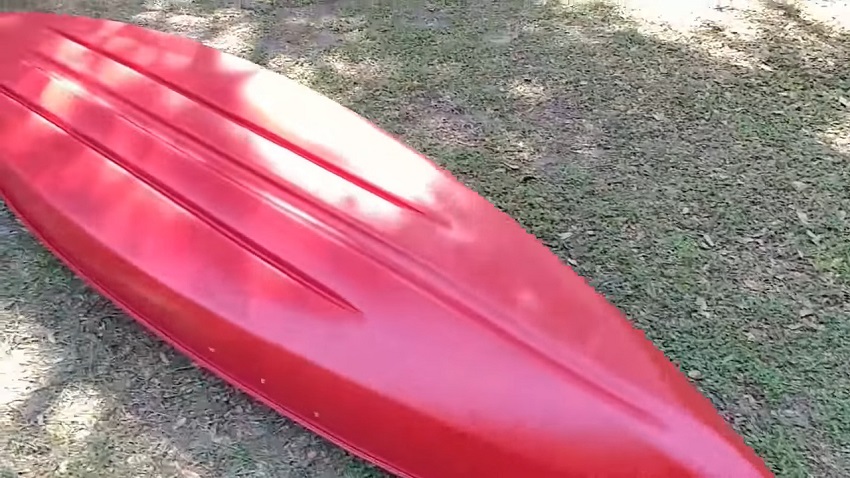 In addition, the seat does not drain, so if you take in water, be prepared to sit in a puddle until you manage to beach up and get rid of the excess water.

Overall, this is an excellent beginner kayak for someone that paddles in calm waters and doesn’t want to spend too much money. However, more serious anglers would do better looking at more sea-worthy kayaks with more features.