The House
Buy Native Titan Propel 12
As an affiliate of Amazon and other retailers, we may earn a small commission when you buy via our links. Thank you!

8Expert Score
The Titan Propel 12 is one of the most popular Native models for plenty of reasons. This kayak has all the great features you’ll find in it’s larger cousin, the Titan Propel 13.5, without the added weight and size. The Titan Propel 12 is geared specifically toward fishing and is easily one of the best pedal-driven kayaks on the market in 2020. Users report that this kayak has a wide range of exciting features, as well as solid performance on the water.
Stability
9
Speed
8
Tracking
8
Comfort
9
Features
8
Portability
6
PROS
CONS

The Titan Propel 12 gets part of its namesake from its length, which is 12’ (366 cm) from bow to stern. The kayak also draws its stability from the wide base, which is 39” (99 cm) at its widest point. One of the only drawbacks of the Titan Propel 12 is that it is a bit heavier than other kayaks of similar size, weighing in at 133 lbs (60 kg) fully-rigged.

The Titan Propel 12’s overall capacity is 500 lbs (227 kg), making it slightly less capable than the Propel 13.5 when it comes to the amount of gear that can be added. Part of the reason why this kayak is able to maintain so much agility and tracking on the water is the stern’s design and water displacement ability, which acts to alleviate the stern’s load and allow the rudder to operate more freely.

One of the main reasons why users prefer Native’s Propel series kayaks is the Propel pedal-drive system’s ability. Users report that this is likely one of the smoothest pedal systems on the market and the kayak can be driven at a steady, fast pace fairly easily compared to other pedal-driven rides.

Native upgraded the Titan Propel 12’s seat with their 2020 model, adding more padding and extra adjustability to accommodate users of all sizes. Instead of worrying about adjusting the pedal system, users can simply slide the entire seat backward or forward to meet their own specific preference. The seat offers a surprising amount of storage capability on either side, as well as underneath.

Another reason anglers love this kayak is the horizontal rod storage system, which keeps two rods on either side of the kayak along with elongated rod top protectors that are located on the bow.

Users will also find a large dry storage hatch on the bow that’s capable of fitting a large amount of gear inside and serving as the perfect storage hatch for camping gear and just about anything else you need to keep dry and out of the elements. The kayak is fitted with multiple carry handles that make it easy to transport.

The Titan Propel 12 also comes transducer-ready with a built-in recess that’s capable of fitting nearly any kind of electronic and sonar equipment to the kayak. With gear tracks that run the length of the kayak on either side, users can fully customize their Titan Propel 12 to place camera gear, fish finders, rod holders and more in the exact locations they want.

The kayak offers a molded cup holder, as well as two flush-mounted rod holders just behind the seat. Users can control the rudder system using a simple knob design that’s located on the port side of the seat.

The Titan Propel 12’s deck is outfitted with anti-slip padding that helps anglers with extra footing when they need it most. The kayak’s stern features a large open well that’s able to store multiple coolers, extra tackle boxes, crates, and just about anything else users need to place behind them.

The Titan Propel 12 is one of the most agile pedal-driven kayaks on the market and has the capability to travel forward or backward instantly without the user resorting to any kind of switches or latches. The kayak also offers decent speed despite its overly-wide frame.

Users report that the Titan Propel 12 offers one of the most stable kayaking experiences and is nearly unable to be flipped. The Titan Propel 12 maintains its stability in rough, choppy water, as well as against the current. The improved rudder also helps add better tracking to an already great kayak. 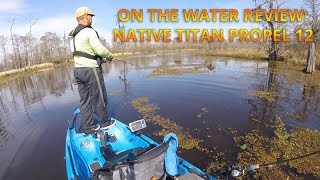 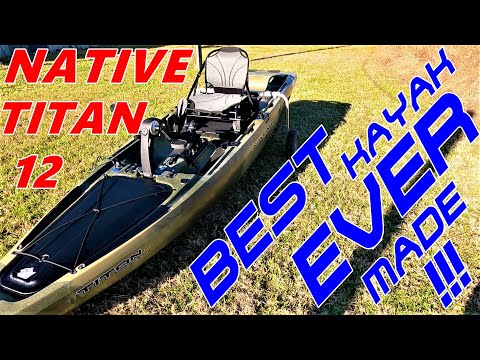 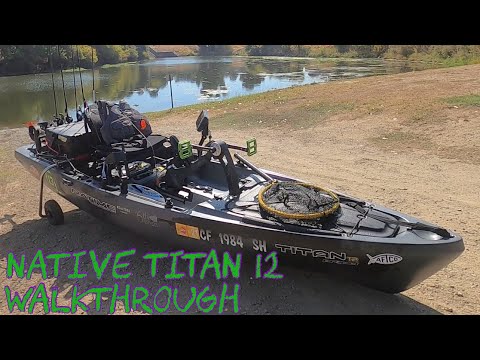 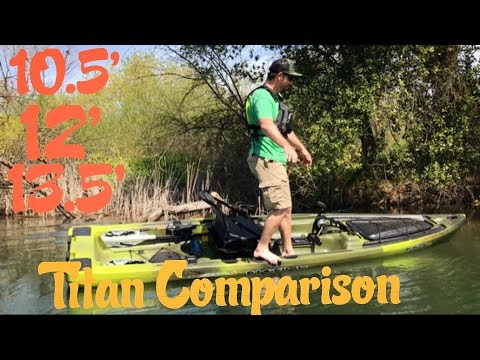 Be the first to review “Native Titan Propel 12” Cancel reply