Last price update was: February 3, 2023 12:43 pm
× Product prices and availability are accurate as of the date/time indicated and are subject to change. Any price and availability information displayed on Amazon at the time of purchase will apply to the purchase of this product.

Add to compare
Add your review
Product is rated as #135 in category Fishing Kayaks
7
Best deal at:

Amazon.com
Buy Native Ultimate 14.5 Tandem
As an affiliate of Amazon and other retailers, we may earn a small commission when you buy via our links. Thank you!

The Native Ultimate 14.5 Tandem has set an impressive precedent for tandem kayaks in 2020. Billed as the lightest weight tandem kayak on the market, the Ultimate 14.5 Tandem is a model that handles like a premium fishing kayak despite its lack of features. Users report that the kayak has great on the water performance and is among one of the best values for tandem kayaks priced at under $1,000. This kayak is perfect for anglers in search of a super lightweight tandem model that allows both users to stand up when necessary.

7Expert Score
The Native Ultimate 14.5 Tandem has set an impressive precedent for tandem kayaks in 2020. Billed as the lightest weight tandem kayak on the market, the Ultimate 14.5 Tandem is a model that handles like a premium fishing kayak despite its lack of features. Users report that the kayak has great on the water performance and is among one of the best values for tandem kayaks priced at under $1,000. This kayak is perfect for anglers in search of a super lightweight tandem model that allows both users to stand up when necessary.
Stability
7
Speed
8
Tracking
8
Comfort
6
Features
4
Portability
9
PROS
CONS

The Ultimate 14.5 Tandem derives its name from the 14’7” (445 cm) length. This kayak sports a 30” (76 cm) width which allows it to have great speed and tracking, especially when considering that it offers enough stability for anglers to stand and fish. The kayak has a fitted hull weight of only 54 lbs (24.5 kg) and a fully-rigged weight of 64 lbs (29 kg) once the chairs are added.

While not possessing the same impressive capacity as the Ultimate FX 15 Tandem PRO, the Ultimate 14.5 Tandem still provides a 450-lb. (204 kg) capacity that is adequate enough for most average-sized anglers. Users of larger-size will likely not be able to bring much gear with them, but younger, smaller users will find this kayak to be a true gem.

Unfortunately, the new Ultimate 14.5 Tandem models no longer have the ability to be used in solo mode, but that doesn’t mean that one angler can’t fish from either the front or rear seat.

Both seats are clearly the best feature on this model as they are crafted from hand-sewn, breathable mesh material. Each seat offers enough padding that’s fitted to an aluminum frame that provides ample back support for all-day fishing trips, or recreation.

As one of the most portable tandem kayaks on the market, the Ultimate 14.5 Tandem features a heavy-duty plastic handle on the bow and stern which greatly improves users ability to handle this one out of the water.

The front half of the kayak is fitted with gear tracks that allow anglers to place rod holders, camera gear, as well as electronic equipment on their kayak. The rear half is not equipped with these gear tracks, but users have found methods of mounting various equipment items to the sides as there is a considerable amount of flat space around the sides of the rear seat.

On either side of the cockpit areas are deeper wells for anglers to place their feet into, which help provide ample stability for standing while fishing. There is also an aluminum thwart bar located directly behind the front seat which helps stabilize the kayak and add rigidity to the unique canoe/kayak hybrid body.

The second thwart bar molded into the kayak just behind the rear seat offers flat spaces that are ideal for mounting rod holders or other equipment to compensate for the lack of gear tracks on the back portion of this vessel.

The stern portion also offers an open well area that can be used for smaller coolers and crates, or as a location to stash more gear. The kayak does offer an anchor trolley which can be switched to fit either side of the boat.

The Ultimate 14.5 Tandem’s stern is also made with rudder-mount grooves and bolts that allow anglers to easily install a rudder.

Compared to other tandem models, the Ultimate 14.5 Tandem seems to lack quite a bit of features, but it makes up for that by offering a surprisingly efficient on-the-water performance. Thanks to its canoe-like hull design and body, this kayak offers excellent tracking in a variety of different water conditions. The speed is also greatly improved when compared to other tandem models due to the super lightweight design. The kayak’s stability is sometimes called into question, especially in rough conditions, but many users report that both anglers can stand and fish in calm waters. For those seeking a do-it-all kayak that can serve as the perfect recreational vessel as well as a fishing kayak, the Ultimate 14.5 Tandem is nearly in a league of its own.

Converting the Ultimate 14.5 tandem into a solo kayak 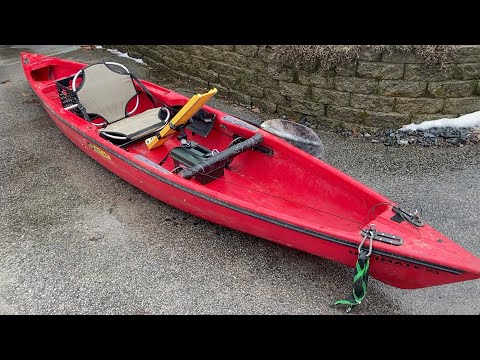 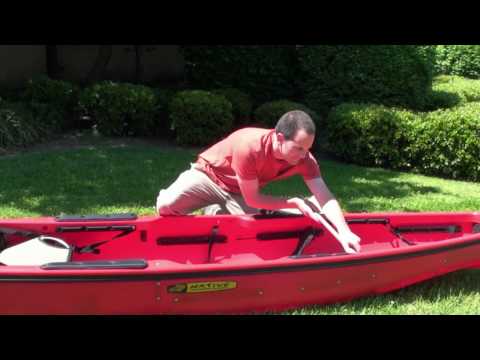 Be the first to review “Native Ultimate 14.5 Tandem” Cancel reply