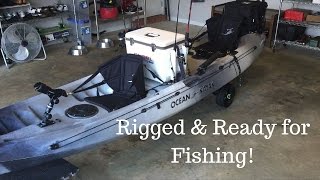 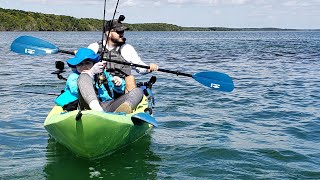 Add your review
Product is rated as #81 in category Day Touring
7.7

Backcountry.com
Buy Ocean Kayak Malibu Two XL
As an affiliate of Amazon and other retailers, we may earn a small commission when you buy via our links. Thank you!

What happens when you add a bit of extra capacity and storage to one of the most popular tandem sit-on-top kayaks on the market? The Malibu XL, that’s what.

With comfortable and adaptable seating, as well as overlapping footwells, the Malibu Two XL has the scope to be paddled solo or tandem. The central position can also be used for children or paddling pets.

7.7Expert Score
What happens when you add a bit of extra capacity and storage to one of the most popular tandem sit-on-top kayaks on the market? The Malibu XL, that’s what. With comfortable and adaptable seating, as well as overlapping footwells, the Malibu Two XL has the scope to be paddled solo or tandem. The central position can also be used for children or paddling pets.
Stability
9
Speed
8
Tracking
7
Comfort
8
Features
7
Portability
7
PROS
CONS

Extra length is not without some extra weight. The Malibu Two XL weighs in at 68 lbs. (30.8 kg). Even for two paddlers, this may not be the easiest kayak on the market to load onto a vehicle.

Along with all of this comes extra capacity. The Malibu Two XL has an enormous load bearing capacity of 500 lbs. (226.8 kg). This is more than enough for two adults, a kid, and all the gear you might want to take with you for the day.

The Malibu Two XL is a versatile kayak which can be paddled either solo or tandem, thanks to the moveable seating system. These seats come with wraparound high back systems which keep you firmly upright and in control on the water. You’ll be comfortable for hours of paddling with how padded they are, too.

The footwells on the Malibu Two XL overlap the seating positions. This is all part of the adjustable seating, but also means that a third, young paddler can sit in the central seat and still take an active part in paddling.

With the extra space that the Malibu Two XL has over the standard model, Ocean Kayak have added extra storage capacity. At the bow and stern are small storage wells, secured with bungee, while in the centre of the boat is a storage strap. The Malibu Two XL can also be outfitted with two additional hatches for internal access, if you require extra storage.

Carrying such a heavy kayak isn’t without some difficulty, but much of this has been alleviated with comfortable grab toggles, front and rear, as well as central carrying handles.

A skid plate on the keel protects the underside of your kayak as you drag it to the water or land on the beach, while a paddle park on the right hand side lets you go handsfree without losing your paddle.

The Malibu Two XL is a leviathan of a kayak, designed for family adventures out on your lake and lazy rivers. The extra length of the boat, compared to the standard model, makes it a little faster over the water and improves the tracking. This extra length combines well with the already wide beam to make the Malibu Two XL extremely stable, a great platform for family adventures.

The additional storage over the standard model gives the XL a more utilitarian feel to it as a recreational kayak. This is a do-it-all style boat which is sturdy enough to stand the test of time.

If there’s one limitation of the Two XL, it would be long distance days. The weight and width don’t lend themselves to paddling these long distances, especially in rougher conditions. This boat has a little extra rocker at the bow and stern which keeps the ride drier when fully loaded but may affect the tracking when paddled solo.